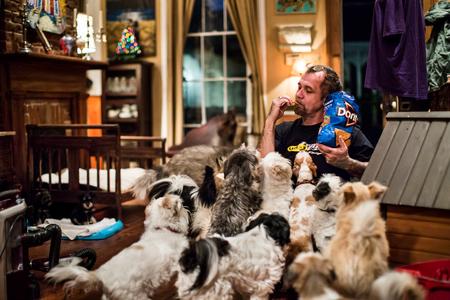 Albert started in construction in the early 80's. He served his apprenticeship with Hovsons Inc.

Hovsons, Inc. was founded in 1963. The Company's line of business includes constructing single family homes and other buildings.

Albert learned his trade literally from the ground up.

Working alongside masons building foundations and with bricklayers. For two years he studied the fundamentals masonry. Albert continued his education in stone work and passed a course at a Vocational Technical School in New Jersey studying at nights. He now holds a Masters certification as a Stone and Tile setter. And is an expert when it comes to repointing old brick work.

From masonry Albert moved into substructure framing. Flooring joists and beam work to the sheathing on the deck of a newly constructed house. The next natural progression was structure framing including various styles of roof framing. Working alongside master framers Albert had a hand in building over 700 homes. Both 1 and 2 stories.

His next years he spent working on plumbing. Installing new lines in new home and repairing damage to older homes. Albert took a 1 year course at the same school and passed his Journeyman certification. He can handle just about any repair from changing out a faucet to installing a tankless water heater. Moving lines for a new kitchen or bathroom is also not a challenge for him.

His next area of study was electrical. Albert found that this would be his chosen trade. 4 years of night school while serving his apprenticeship with Steer Electric in Toms River New Jersey. Albert soon gained his masters certification as a Master Electrician. Industrial, Commercial and Residential.

As the years progressed so did his knowledge in home construction and maintenance he decided to start his own handyman company. He has lived in may areas across this country and has had a handyman business in every one of them.

Southern California, Arizona, New Jersey, Virginia, Georgia, And Louisiana. Since the age of 17 Albert has been in the construction field. He is 50 now.

Albert landed in Louisiana quite by accident. He had come to this state (that he now calls home) as a volunteer lineman. What happened next was an unexpected turn of events. Seeing that Linemen from all over the country had descended upon New Orleans after Katrina, he saw no need for his services in this field. The city had plenty of linemen. What he did notice was the stray dog population. Scared and hiding under houses. He joined up with a group of volunteers In Gonzales LA. Specifically the Lamar Dixon Expo center. This was a life changing event. This is where all that schooling and training in construction paid off. Most of the homes had been so severely damaged You could not enter them. The pups would hide under and in them. His knowledge in building served him and the dogs well. Shoring up collapsing homes with just the materials from other collapsed homes. He would crawl under, through mud and muck with his catch pole and get dogs out and back to the expo center for treatment.

For three months Albert lived in a tent. He drove from Gonzales to the lower 9th ward every day. Using a map all the volunteers would get every morning. He would look for, feed and water, and catch dogs. Most of them Pitbulls.

Albert decided to start Bastin Enterprises as a one stop shop for all of your handyman needs.

Handyman prices are reasonable. You do not need a contractor to change a ceiling fan, just a handyman

To this day, Albert still continues to rescue strays. Sometimes he finds their owners and reunites them. Others, he rehabilitates and then adopts them out at his own cost.

Albert is a very talented dedicated individual. His hobbies include, Drawing, sculpting, jewelry making and furniture building. He loves being a handyman and it shows in the quality of his craftsmanship. Take a moment to look at the slideshow at the bottom of the home page.

Below you can see some of his rescue pups.